Welcome to the saga of how I managed to acquire a wonderful piece of American broadcast history, a 1950's vintage AM Broadcast Transmitter made by RCA - the BTA-1M. The BTA-1M is a classic "shutter door" type transmitter that has switchable power levels of either 500 Watts or 1000 Watts and tips the scales at around 1500 pounds. My BTA-1M was obtained from radio station WFBR, 1590 AM, Glen Burnie Maryland, and was in use as late as October 2004.


Many thanks to Bill Parris III (WA3VCH), WFBR Chief Engineer, for seeing to it that his fine piece of history was saved from the scrap heap, and to Paul Courson (WA3VJB), broadcast transmitter rescuer extraordinaire, for making it available to me.

I found that from a logistics point of view, rescuing a broadcast transmitter of this size wasn't all that difficult. Finding the one "for me" took a few years though. Paul worked with me on two previous transmitters but for various reasons (location, type, condition, timing etc) I passed them up. When Paul called me about the BTA-1M, the condition and "shutter door" style clinched it for me -- the quad 833's helped a lot too...

I decided that I'd pony up and get a truck with a hydraulic lift gate; this proved to be a very smart thing to do. I'm not sure we could've pulled off the "rescue" without the lift gate. So, on a bright and sunny Saturday morning my compadres and I left York PA for Baltimore. I drove the truck with Chuck (KB3JXY) riding shotgun, while Scott (KC0RIJ) and Mike (N3VQH) followed in Scott's truck. Mike had his GPS and laptop with him and provided us with excellent driving directions while Scott ("what horns? I didn't hear no horns!!") did an excellent job of lane clearing. This was the first time I'd ever driven a 16 foot truck, and as Mike and Scott will attest, we were half way to Baltimore on Interstate 83 before I hit 65 MPH !! We arrived at WFBR around 0900 and met up with Paul (WA3VJB). 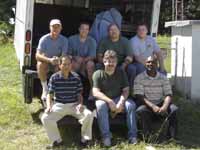 Here's some photos the BTA-1M installed at WFBR. The last two photos pretty much show the tight fit where the BTA-1M was installed. There was only one way to remove the transmitter, and that was pushing it out "frontwards" then dragging it towards the camera. Remember that I said it was logistically easy to rescue the transmitter; that didn't include getting it out of the building. 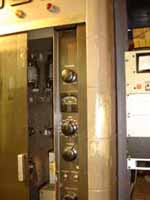 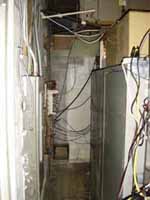 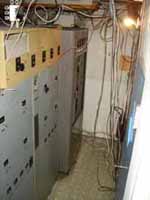 
Interior Photos Prior to Moving the Transmitter

Upon arrival at the station, Paul and I immediately saw the whopper tranny that was sitting outside the station with a plastic cover on it (1). Paul went inside to ask the station engineer if we could have it ( as it just wouldn't do to leave such an item lying about for the trash man...), and returned to inform me that the beast was in fact the modulation transformer used for the BTA-1M (2) -- obviously non standard. Mike and Chuck attempted to lift the transformer onto the dolly (4) with the intention of moving it to the truck. Bad idea, as they found the transformer weighs several hundred pounds!! So, Chuck decided to use his come-along (5) and, with Scott's help, they managed to get it onto the truck's lift gate.

Moving The BTA-1M To The Door

1: The back of the station from which the transmitter would soon be extricated. Note the small upslope just outside the door.
2: Paul supervises Scott removing the door.
3-4: Mark carefully marking the innards of the transmitter prior to removal of the transformers.
5: Paul having fun with the camera.....
6: Mark removing the metal strap connectors on the 833's.
7: Paul....
8-10: Dr. Paul performs yet another successful 833 delivery!!
11: Proud papa K3MSB holding his fist 833!
12-13: Carefully storing the 833's for the trip home.
14: Don't drop that tube....
15: Paul with the 807's....
16: Mark carrying the "para" choke.
We still don't know quite what it's for as I haven't drawn out the wiring diagram for the non-standard modulation tranny.
17: The transmitter is this big and this wide. The access space is this wide; We figured we could get the transmitter
through.... if we scrapped some paint off the walls.....
18: David, the WFBR Engineer, explaining to Mike N3VQH that under no circumstances must we move this knob. David is not fluent in English, and we never did find out what the knob did, but he impressed upon us that it could take two weeks for the station to recover if we moved the knob. Remember the "Holy Hand Grenade" ? This was the "Holy Knob". Thoust shall not move it to the left or to the right..... We were all itching to nudge that knob.... just a little....
Jump ahead to picture 24 for a moment. The problem we ran into was that there was a conduit on the left almost in front of "the knob". The width of transmitter was such that we could not just push it out without breaking the conduit and/or breaking the knob. What we ended up doing was slightly angling the transmitter so that when the leading end got passed the knob, the knob was inside the back of the transmitter. We then pushed the transmitter so that the trailing end was at the knob and again slightly angled the unit to get the knob out from the back. Tight fit, but it worked. 19-22: Photo 19 shows me (K3MSB) with the transmitter in front, the solid state satellite uplink rack to my right, the station wall in back of me, and the studio plate glass window is to my left. Trapped like a rat. Paul, a CNN audio guy, "asks" me for an interview. If I refuse, everybody goes home!! How could I refuse, eh ?
35: At the door, ready to see the light of day...

1-5: Getting the RCA out the door was a push-pull operation; Keith and Scott pushed while Mark and Chuck pulled!! 8-15: We couldn't get the transmitter onto the lift gate from where is sat; we needed to move it several feet further away from the building. So, we used the truck to drag it the distance we needed, then backed up the truck to position the lift gate close to the transmitter. 17: "Hey, you guys seen a modulation transformer around here? I'm working on a QRP project...."


We needed to turn the truck 90 degrees to the left to head home, but the truck is pointed up-hill with a 3/4 ton transmitter in back so we just can't go forward and turn. We have to do a series of three-point turns. Everything goes fine until the very last leg.... we get stuck!!

We were later told that the entire area in back of the radio station had been used as a burn area for decades, and that grass had only started growing the past few years. In other words, the entire back yard was a layer of dirt atop ashes. This wasn't noticeable when we did the initial walk-around before positioning the truck.
Scott gave it the old college try with his truck, but the strap snapped. A discussion ensued about using a chain, but I didn't want to risk a smashed rental truck windshield or damage to Scott's truck if the chain snapped. So, we decided to call AAA !!
Mark and Chuck work the phones as Paul reflects on the turn of events. I have a standard AAA membership, and Chuck has the next one up. AAA Wouldn't touch a rental truck with either. I called the rental truck company and they would send a tow truck, but the price was more than a tad salty.
So, we dig. Scott and Mark make like gophers! The idea was to wedge some bricks under and in front of the rear tires to they'd have some traction. Nice idea, but it didn't work. We found that the rear of the truck was actually resting on the lift gate's lower support bar. The wheels went round and round... but the truck didn't budge.

Well, it's now about 3 PM on a Labor Day weekend Saturday afternoon, and we need a tow. We had no idea who to call, so we called AAA's back and asked if the could recommend a local towing company, and they did !!
Want to know what it costs to get a tow truck "right now" that can tow a 16 foot truck on a Labor Day weekend? No, you don't. Trust me on this one. Picture 16 shows me reaching for my wallet. Thanks to the "Moving Crew" that chipped in on the bill !! By the way, the guys from "Transport & Towing Inc" were prompt and courteous; if you're ever hauling an old transmitter in Glenn Burnie and get stuck, give 'em a call.

Arrival at the K3MSB Radio Ranch


My shack is one half of my garage, so getting the RCA off the truck and into the shack wasn't too much of a problem.

Here's some photos of the Crystal Oscillator...

...and the Solid Stated Rectifiers, 807 and 833 sockets on the back panel, and the Blower Switch.